Anti-Vagrancy, Punishment and Labor Relations in the Context of the Abolition of Slavery in Brazil and the Portuguese Empire (1870–1910) 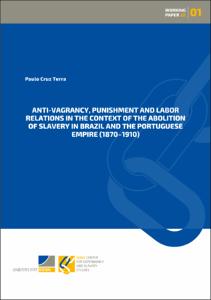 Focusing on the Brazilian and Portuguese Empire contexts, between 1870 and 1910, this text aims to investigate how the slavery abolition process affected the different historical definitions of what constituted vagrancy and how those definitions related to categories such as class, race and gender; and the way punishments for vagrancy changed over time and how those changes were linked to the transformations associated to the new workers’ labor and production relations. This article first explores the effect that the abolition discussions had on the definitions of vagrancy, and what the previous definitions had been. It goes on to show how, in the post abolition period, the concept of vagrancy was expanded to criminalize workers’ practices and behaviors. An important innovation and contribution of this article is that it is the first comparative and connected analysis of the transformations in labor relations in the abolition context in those spaces with the persecution of vagrancy as its central focus.