“Free Like Other Freeborn People” or Just Another Form of Dependency?

Questioning the Situation of Manumitted Slaves in Early Modern Istanbul 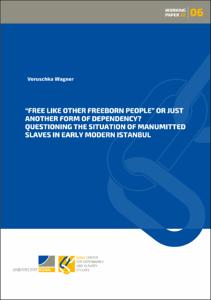 This paper aims to present some thoughts and research findings related to my ongoing project on Ottoman slavery and dependency. The project, entitled “Spatial and Social Mobility of Slaves from the Black Sea Region in Seventeenth-Century Istanbul,” is part of the Transottomanica project funded by the German Research Foundation (DFG). The project focuses on the mobility and agency of slaves and aims to give information about their legal and social status, their trajectories during and after enslavement, and their role in society. Based on the concept of asymmetrical dependency used by the Bonn Center for Dependency and Slavery Studies (BCDSS), my focus in this paper is on the legal and social status of slaves after their time of enslavement in terms of dependency. Drawing on entries in Istanbul-area court records of the sixteenth and the seventeenth centuries, I address the question of freedom, and present some preliminary results concerning forms of asymmetrical dependency that shaped slaves’ lives after emancipation.