The Numerus Clausus Law of 1920: Asymmetrical Dependencies, and the “Twisted Road” of Hungarian Jews to Auschwitz 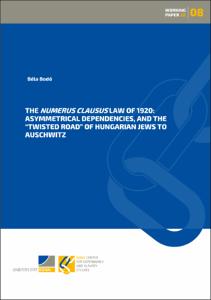 This working paper examines the impact of the infamous numerus clausus legislation of 1920, which limited the share of Jewish students at institutions of higher learning to their proportion of the population, on incoming students, the position of Jewish graduates in the labor market, and the changing status of Jews in Hungary in the interwar period. It argues that the law not only reversed the process of Jewish emancipation in Hungary, but it also paved the way for the rise of a new form of relationship characterized by strong asymmetrical dependence, between the Hungarian elite and middle classes and their Jewish counterparts in the interwar period. The essay focuses on agency, the elimination of "exit strategies", social marginalization, and the fate of university graduates during the Shoah.