Molecular genetic analysis of boar taint
View Item
JavaScript is disabled for your browser. Some features of this site may not work without it. 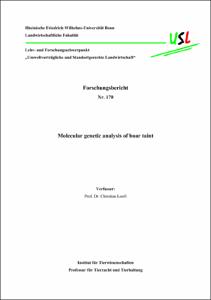 Boar taint is an unpleasant smell and taste of pork meat derived from some entire male pigs. The main causes of boar taint are the two compounds androstenone (5α-androst-16-en-3-one) and skatole (3-methylindole). It is crucial to understand the genetic mechanism of boar taint to select pigs for lower androstenone levels and thus reduce boar taint. The aim of this study was the identification of genes and pathways influencing boar taint and involved in androstenone and skatol metabolism. Therefore polymorphisms in relevant genes were identified and transcriptome analysis using Affymetrix-Chips and RNA-Seq in the two major organs involved in androstenone metabolism i.e the testis and the liver was performed. Differentially regulated genes in high androstenone testis and liver samples were involved in metabolic processes such as retinol metabolism, metabolism of xenobiotics by cytochrome P450 and fatty acid metabolism. Moreover, a number of genes encoding biosynthesis of steroids were highly expressed in high androstenone testis samples. Gene polymorphism analysis revealed potential mutations in HSP40, IGFBP1, CYP7A1 and FMO5 genes affecting androstenone levels. Further studies are required for verify the role of candidate genes to be used in genomic selection against boar taint in pig breeding programs. According to the results of association studies, FMO5, CYP21 and ESR1 turned out to be the most promising candidates for boar taint.