Seasonal variations of sperm freezability associated with testicular germinal epithelium changes in domestic (Ovis aries) and wild (Ovis musimon) rams
Dokumentanzeige
JavaScript is disabled for your browser. Some features of this site may not work without it. 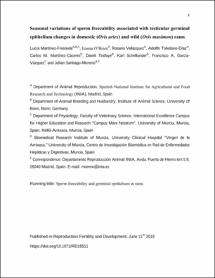 The aim of this study was to examine ovine sperm cryoresistance during the rutting season (RS) and its association with sperm head area and seminiferous epithelium proliferation. Small ruminants show fluctuating testosterone levels throughout the year which could interfere with spermatogenesis and sperm cryopreservation. Ejaculates, testicular biopsies and blood were collected during the middle and the end of the RS (Middle-RS vs End-RS) during periods of high and low testosterone levels in Merino and Mouflon rams. Fresh and frozen-thawed sperm quality, sperm morphometry, seminiferous tubule morphometry and testicular proliferation markers (proliferating-cell nuclear antigen, Ki67 and GATA-4) were evaluated. Post-thaw sperm viability was higher in the End-RS in Merino (69.9±8.2 vs 41.6±7.3%; P=0.020) and Mouflon (40.9±3.3 vs 24.2±5.0%; P=0.008). Mouflons had larger sperm head area at the End-RS (38.3±0.2 vs 34.3±0.1 μm2; P=0.029), whereas there was no difference between Merino groups (35.7±0.5 vs 34.8±1.0 μm2). Seminiferous tubule morphometry and proliferation markers showed higher levels of germinal epithelium proliferation in the Middle-RS of both species. In conclusion, sperm freezability is affected during the RS in domestic and wild rams which could be correlated with changes that occur during spermatogenesis since there is an effect of season on cell proliferation in the testis.