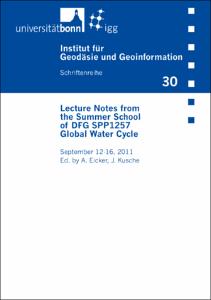 In 2006, the German Research Association DFG had established the coordinated Priority Program SPP1257 Mass distribution and Mass Transport in the Earth System. According to DFG’s philosophy, SPP’s are meant to enable broad-scale research in new, emerging fields. The objective of the SPP1257 was to facilitate integrated analysis of novel-type data collected from dedicated gravity field and radar altimetry satellite missions, to improve our knowledge about mass distribution and mass transport processes within the Earth system such as melting of continental ice sheets and glaciers, changes in ocean circulation pattern and in sea level, variations of surface and ground water levels and river discharge, glacial-isostatic adjustment, mantle convection and tectonics, and to investigate interactions between these processes. During six years, many Ph.D. students and postdocs from more than 30 institutions worked together in collaborative projects.
These lecture notes were compiled on the occasion of the summer school Global Hydrological Cycle, organized by the SPP1257 at September 12-16, 2011 in Mayschoss/Ahr, in which about 70 Ph.D. students, postdoc researchers and master students participated.The challenge imposed on thelecturers wasto familiarize students with widely ifferentbackground (geodesy, hydrology, oceanography, geophysics, mathematics) with
• concepts of observation systems and data processing, such as analysis of data from the Gravity Recovery and Climate Experiment (GRACE) gravity mission, and from radar altimetric satellite missions, associated problems such as noise, spatio-temporal sampling and aliasing, data post-processing techniques such as spherical harmonic synthesis and analysis, gridding, smoothing, covariance analysis, EOF analysis, and
• concepts of modelling and interpretation in hydrology and hydro-meteorology, oceanography and sea level, tides, ice sheet modelling, climate dynamics, and solid-Earth geodynamics.
The focus of the summer school wason concepts, and technical proofs were avoided. Lectures were accompanied by exercises, practicals and group work. Last not least, exciting discussions could be continued during barbecue, walks on the Rotweinwanderweg, and in the cellar of the Winzergenossenschaft.