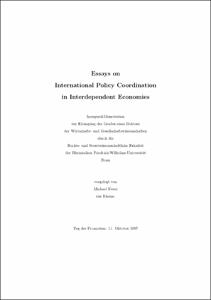 Evers, Michael: Essays on International Policy Coordination in Interdependent Economies. - Bonn, 2007. - Dissertation, Rheinische Friedrich-Wilhelms-Universität Bonn.
Online-Ausgabe in bonndoc: https://nbn-resolving.org/urn:nbn:de:hbz:5-12472
@phdthesis{handle:20.500.11811/2777,
urn: https://nbn-resolving.org/urn:nbn:de:hbz:5-12472,
author = {{Michael Evers}},
title = {Essays on International Policy Coordination in Interdependent Economies},
school = {Rheinische Friedrich-Wilhelms-Universität Bonn},
year = 2007,
note = {Throughout the last couple of decades the world has experienced a strong and steady increase in the economic interdependence among national economies. Accordingly, national monetary and fiscal policies are also subject to a steady increase in mutual interdependence. As a consequence, the international coordination of monetary and fiscal policies among economies has become a central postulation within both the public as well as the academic debate.
The first essay of this thesis addresses a central proposition in the academic literature on international monetary policy coordination: the gains from international policy coordination are fairly small. The role of monetary policy is restricted to the stabilization of macroeconomic fluctuations and gains from policy coordination arise from preventing national monetary authorities from strategically manipulating the terms of trade by means of these stabilization policy instruments. The first essay challenges this proposition. It is argued that welfare gains from stabilizing fluctuations are generically quite limited since they are of second order. It is demonstrated that national monetary authorities follow a more general objective to monetary policy than the mere stabilization of macroeconomic fluctuations and that there indeed exist strategic motives to nationally deviate from a globally optimal monetary policy. Importantly, as these incentives are independent of macroeconomic fluctuations, the welfare consequences of the competitive policy conduct are of first order. Hence, the essential result is that - as opposed to the common view in the literature - gains from monetary policy coordination can be substantial as they are of first order.
The second essay of this thesis explores the interaction of monetary and fiscal policy conduct when countries coordinate on only one part of national macroeconomic policies. In particular, it is shown that international policy coordination requires to include both monetary as well as fiscal policy. The coordination of only a part of national macroeconomic policies through an international agreement leads to a strategically motivated shift in the conduct of the remaining independent policy instruments in order to still unilaterally manipulate the terms of trade. The potential gains from international policy coordination are therefore squandered if policymakers only cooperate, for instance, on monetary policy alone but leave the fiscal stances independent. Moreover, by letting the fiscal policy instruments be chosen non-cooperatively, monetary policy coordination might even create welfare losses as compared to no macroeconomic policy coordination at all.
The third essay deals with a particular form of monetary and fiscal policy coordination: a monetary union and a federal fiscal transfer arrangement. It is asked whether a built-in fiscal transfer system that collects taxes from some member countries and pays transfers to other member countries can alleviate the economic consequences of adverse shocks. The properties of federal fiscal transfer schemes are explored with regard to their capability to stabilize national consumption, production and employment. The key result of this analysis is that federal fiscal arrangements can provide perfect insurance against adverse shocks.},