Essays on Adaptive Learning with Applications to Monetary Policy 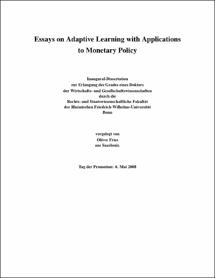