Experimental and theoretical essays in auctions and financial markets 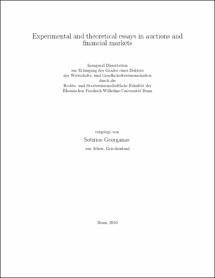