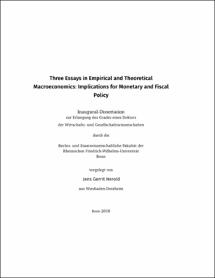 Interest rates and debt are key policy instruments for monetary and fiscal policy makers and relevant not only for the individual's decision but also for the economy as a whole. This work contains three chapters on the role of monetary and fiscal policy for macroeconomic analysis. The first chapter further investigates a well-known empirical puzzle on the mismatch between interest rates calculated from the most standard macroeconomic consumption model and risk-free market-rates. The second chapter introduces the risk of aging and thus, a parsimonious life-cycle structure to a Heterogenous-Agent New-Keynesian (HANK)-Model and analyzes the implications of greying societies for monetary policy. The final chapter reviews 20 years of the European fiscal framework following the introduction of the stability and growth pact.