Implications of the Great Recession for Fiscal and Monetary Policy 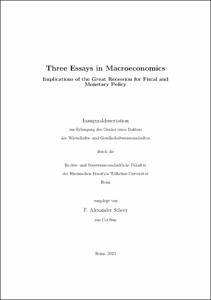 The Great Recession prompted several governments and central banks in advanced economies to take exceptional measures, whose consequences are still visible today. In particular, two developments seem to be noteworthy. First, many governments' debt-to-GDP ratios are high with no sign of returning to pre-crisis levels, raising concerns about their sustainability. Second, interest rates are low and in some countries at the effective lower bound, reducing monetary policies' room for manoeuvre.
This thesis investigates several implications of these two consequences of the crisis for fiscal and monetary policy. The first two chapters focus on means to reduce the debt-to-GDP ratio, either by generating primary surpluses through budgetary adjustments (chapter 1) or by directly lowering the interest rates on government debt due to financial repression (chapter 2). The last chapter evaluates the impact of interest rate forward guidance, an important tool for central banks to enhance the effectiveness of monetary policy at the effective lower bound.