Biased and unbiased estimates based on laser scans of surfaces with unknown deformations
View Item
JavaScript is disabled for your browser. Some features of this site may not work without it. 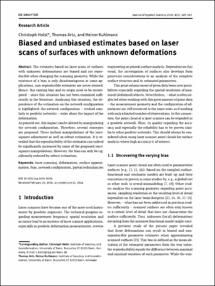 The estimates based on laser scans of surfaces with unknown deformations are biased and not reproducible when changing the scanning geometry. While the existence of a bias is only disadvantageous at some applications, non-reproducible estimates are never desired. Hence, this varying bias and its origin need to be investigated – since this situation has not been examined sufficiently in the literature. Analyzing this situation, the dependence of the estimation on the network configuration is highlighted: the network configuration – studied similarly to geodetic networks – rules about the impact of the deformation.
As pointed out, this impact can be altered by manipulating the network configuration. Therefore, several strategies are proposed. These include manipulations of the least-squares adjustment as well as robust estimation. It is revealed that the reproducibility of the estimates can indeed be significantly increased by some of the proposed least-squares manipulations. However, the bias can only be significantly reduced by robust estimation.