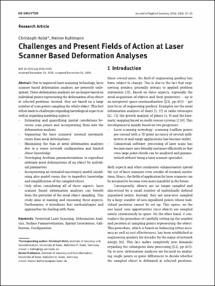 Due to improved laser scanning technology, laser scanner based deformation analyses are presently widespread. These deformation analyses are no longer based on individual points representing the deformation of an object at selected positions. Instead, they are based on a large number of scan points sampling the whole object. This fact either leads to challenges regarding metrological aspects as well as regarding modeling aspects:
–– Estimating and quantifying spatial correlations between scan points and incorporating them into the deformation analysis
–– Separating the laser scanners’ internal systematic errors from areal deformations
–– Minimizing the bias at areal deformation analyses due to a worse network configuration and limited object knowledge
–– Developing freeform parameterizations to reproduce arbitrary areal deformations of an object by individual parameters
–– Incorporating an extended uncertainty model considering also model errors due to imperfect knowledge and simplification of the sampled object.
–– Only when considering all of these aspects, laser scanner based deformation analyses can benefit from the potential of the areal object sampling. This study aims at naming and reasoning these aspects. Furthermore, it introduces first methodologies and approaches for dealing with them.