“We can kill striking workers without being prosecuted”: armed bands of strikebreakers in late Imperial Germany
Dokumentanzeige
JavaScript is disabled for your browser. Some features of this site may not work without it.

“We can kill striking workers without being prosecuted”: armed bands of strikebreakers in late Imperial Germany 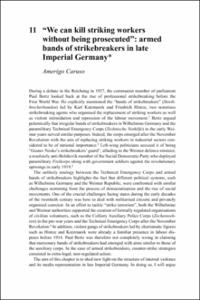 This chapter focuses on the violence perpetrated by armed bands of professional strikebreakers in Wilhelmine Germany. It examines the context in which violent strikebreaking tactics emerged and became part of the social reality and the media reconstruction of it. What makes the activities of armed strikebreakers remarkable is that violent confrontations during labour disputes were some of the most frequently discussed and polarising topics in German newspapers during the decade before the First World War. The Social Democratic press complained on an almost daily basis about legal discrimination against unionised workers and the intensification of violence and intimidation perpetrated by armed strikebreakers, which went largely unpunished. The de facto impunity of armed groups of strikebreakers can be explained as an extra-legal response aimed at protecting the so-called loyal classes after leading conservatives and employers’ associations recognised that the intensification of repressive authoritarian practices against the labour movement could not be legally imposed. The rise of armed strikebreaking was economically motivated by the steady growth in demand for replacement workers and for the protection of non-strikers, but it was also politically motivated in that it was a counterstrategy against “social-democratic terrorism”.