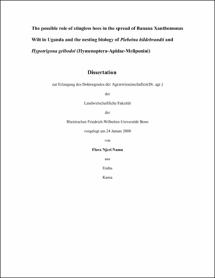 In Uganda stingless bees were speculated to be the primary vectors of Xanthomonas campestris pv. musacearum (Xcm), the causal agent of banana xanthomonas wilt which emerged in year 2001. Xanthomonas is speculated to enter the banana plant through moist scars of recently dehisced male flowers and floral bracts. However, no study had been done to support the hypothesis that stingless bees were the primary vectors. We therefore determined the probable role of stingless bees in the spread of Xanthomonas in Uganda. As there was no selective culture medium for Xcm, we applied indirect approaches to test whether stingless bees would get in contact and carry the bacteria during foraging. We documented the foraging behavior of colonies in wooden observation hives and in banana farms. We tested whether workers of Hypotrigona gribodoi Magretti and Plebeina hildebrandti Friese would take up banana sap, bacterial ooze and nectar offered at the nest entrance. Nectar of banana flowers has low sugar content. Therefore we investigated if P. hildebrandti workers would recruit nest mates to experimental feeders with 11%, 33%, 48% and 54% sugar solution. We further determined the distance the bees would fly to collect such solutions. In addition we documented nesting sites of stingless bees in the banana farms. The nest architecture of two most common species; H. gribodoi and P. hildebrandti was described.
We recorded four species of stingless bees, Hypotrigona gribodoi, Plebeina hildebrandti, Meliponula ferruginea Lepeletier and Meliponula sp. in the banana farms. They nested in termite mounds, cavities in trees, houses and other man made structures. The four species collected nectar from both male and female banana flowers. They did not collect banana and bacterial ooze from scars of recently dehisced male flowers and at the nest entrance. Pisang Awak, the banana variety which is most susceptible to Xcm, had mean nectar sugar concentration of 12.5%. The foraging distance of workers of P. hildebrandti decreased with decrease in sugar concentration. When 11% sugar solution was offered the bees stopped foraging at 1050m and for 33% sugar at 1215m. The foragers would therefore fly less than 1215m from the nest to collect Pisang Awak nectar.
If Xcm is present in nectar and incase the bees got accidentally contaminated with it, they would spread it over short distances. There is therefore need for studies on possible long distance vectors.