Insulin like growth factor-I (IGF-I), its receptor (IGF-IR) and Insulin receptor substrate 1 (IRS1) expression as an early reaction of PDL cells to experimental tooth movement in the rat 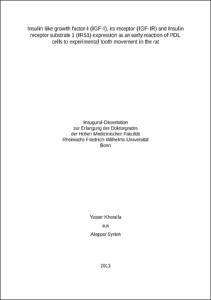 The aim of this study was to characterize the role of IGF-I and its signalling in vivo as an early reaction to the mechanotransduction process, and to analyse the changes of the local expression of these factors related to the magnitude of the applied force.
The right upper first molars of 20 anesthetised rats were loaded with forces in order to be moved mesially. In the first group of animals, constant forces for 4 hours of 0.1 N, 0.25 N and 0.5 N were applied in four animals each. The applied forces were kept constant and recorded continuously for 4 hrs. After 4 hrs all 12 animals were sacrificed. In the second group, constant forces of 0.1 N were applied for 2 hours in 8 animals. Afterwards, the first and second molars in the second group were passively separated with composite and the occlusal contacts were eliminated by slicing the antagonistic lower molars. Four rats were sacrificed after 24 hrs and four after 48 hrs. The untreated contralateral molars in 4 rats served as controls. Paraffin-embedded sections of the resected jaws were prepared for immunohistochemistry to localize insulin-like growth factor-I (IGFI), its receptor (IGF-IR), and insulin receptor substrate 1 (IRS1). Histomorphometric analysis was performed to count the percentage of immunoreactive cells in different parts of the periodontal ligament. The statistical analyses were performed with SPSS Software.
The results showed that IGF-I-, IGF-IR- and IRS1-positive cells were observed in the periodontal tissues of the control and loaded teeth. In the experimental group, the number of IGF-I-, IGF-IR- and IRS1-positive cells increased significantly on the tension side and decreased on the compression side. The increase of immunopositive cells at the tension side was in a time-dependent manner and tended to be dependent on the force magnitude. The decrease in the immunopositive cells at the pressure side was only observed in the first group (4 hrs) and tended to be dependent on the force magnitude.
These data indicate a close relationship between mechanical loading of the PDL and the autocrine/paracrine expression of IGF components as an early step in the mechanotransduction process leading to an organized remodelling of the PDL and alveolar bone in the long term.
Moreover, the local increase/decrease of IGF-I appears to provide a link between the mechanical loading/unloading, the activation/inhibition of proliferation and differentiation of PDL cells and the inhibition/induction of the antiapoptotic activity in the periodontal ligament in the early phase of tooth movement. However, more studies are required to confirm or rule out these hypotheses.