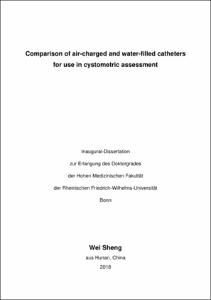 The aim of this study was to determine whether the air-charged and water-filled pressure readings were equivalent. A single catheter system, the commercially available 7-Fr T-Doc air-charged catheter, was tested in different scenarios (like during Valsalva and cough manoeuvres). With this catheter model, simultaneous readings of water and air pressures within the bladder could be achieved. Then the filling and voiding data recordings were compared to each other. The paired-data points of these events were evaluated using the paired t-test, Bland-Altman plots and linear correlation methods, respectively.
25 patients were recruited and examined, 21 patients were included for analysis in the end. Both sets of the system showed a good correlation at Valsalva manoeuvres (R2=0.988, 0.972 for vesical and abdominal pressure respectively) and coughs (R2=0.968, 0.943 for vesical and abdominal pressure respectively). Paired t-test of detrusor pressure (Pdet) showed that there was no statistically significant difference between the two measurements at Valsalva manoeuvres (p=0.85), at initial resting pressure (p=0.13), at 50±10ml resting pressure (p=0.16) and at voiding pressure at maximum flow (Qmax; p=0.51).However, Bland-Altman plots indicated values of a given patient between the two methods could reach up to 5.2 cm H2O and 8.1 cm H2O in vesical and abdominal pressure measurement respectively at Valsalva manoeuvres, to 20 cm H2O and 19.5 cm H2O in vesical and abdominal pressure measurement respectively at coughs. Paired data, in other urodynamic events, also showed similar discrepancies between the two systems.
ACC and WFC might be interchangeable for some urodynamic parameters like Pves and Pabd at Valsalva manoeuvres, but not for fast changing pressure signals like coughs. Studies focusing ACCs are still lacking. Missing data from such studies is the main reason why ACCs currently cannot replace WFCs in conventional UDS. However, based on data reported in this thesis, it appears that the catheter systems are equivalent when it comes to diagnosis based on patterns, like for diagnosis of urinary stress incontinence and DO. In case accurate pressure values are needed - like for diagnosis of BOO and calculation of bladder compliance - ACCs appear to be inferior compared to WFCs based on current guidelines.