The Functions of Literature: A Diachronic Perspective on the British Novel on Terrorism from the Victorian Fin de Siècle to the Present 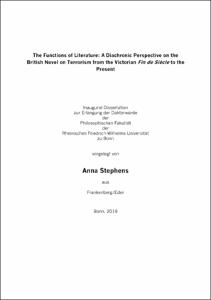 Modern terrorism emerged over 150 years ago. It not only wreaked havoc on individuals and societies and inspired widespread fear of future attacks, but also triggered a myriad of fictional responses by writers and film-makers, whose relevance for cultural production and meaning-making has drawn a lot of attention in Cultural and Literary Studies in recent years. The present study focuses on narrative fiction, and, more precisely, the British novel. From the 19thcentury anti-colonial Irish Fenians to the homegrown Jihadists of the 21st century, Britain’s experience of terrorism is long, varied and replete with actions and ideologies. Considering aspects such as the mentality, literary, cultural and political history of Britain, this work strives to illustrate how the representations have processed British terrorism discourses throughout history. Informed by a diachronic perspective, novels dealing with terrorism from the fin de siècle to the early 21st century are discussed and the continuities and differences of the novelistic representations of terrorism are elucidated. One of the key questions underlying this analysis concerns the potential literary functions that British novels dealing with terrorism may fulfil. That is, which literary strategies have been applied to realise cultural, mnemonic and ethical functions. Therefore, this study draws on contemporary theories of Cultural Studies, Memory Studies and Ethical Criticism.