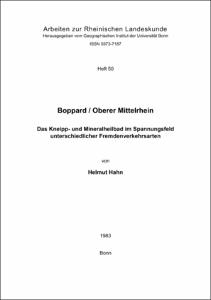 Boppard on the upper Middle Rhine. The health resort and spa in a field of tension torn between different types of tourism.
Tourism in Boppard had experienced a rapid upswing between 1951 and 1962. Although the number of registrations (guests) continued to rise even after that (> 60%), the total of overnight stays - fluctuations apart - stagnated. This can only have been the result of a structural change in the composition of visitors, and it is related to a reduction in the average duration of visits, to an increasing strain on the tourist trade at weekends, together with a diminishing demand during the middle of the week, and to an accordingly declining profitability. lt is the task of this investigation to produce a more detailed analysis of the causes, extent and consequences of this development.
The tourist catchment area predominantly extends to the north in an extremely asymmetric fashion in which the river Rhine presents the axis, judged by interviews with guests and records of car registration numbers. Visitors from the northern part of the Rhineland Palatinate, western South Hesse and the Saarland are chiefly day trippers. In North Rhine-Westphalia (Rhineland and the west of Westphalia) day visitors and overnight guests overlap. A comparison with the survey carried out by SCHAAKE (1966) shows that the catchment area of overnight guests has contracted further, with losses increasing among the share of weekend guests.
The losses in visitors from the home country could not be entirely offset by the growing number of foreign guests. The Dutch account for almost half the day trippers, thereby occupying the first place. Among the overnight guests the Dutch vie with the British for the first place, each providing ± 30% during recent years.
The types of visitors - day visitors, short-term and weekend visitors (overnight accommodation = 3 nights), holiday-makers (= 4 nights}, campers and those visiting the spas as patients - are differentiated from one another by diverging demographic and social structures. Their behavioural patterns in regard to activities at the holiday resort vary accordingly, as they do in respect of their choice of accommodation and especially the level of their expenditure. Whilst weekend and short-term visitors are more likely to belong to the upper middle class (at least in respect of their income), the holiday-makers must be counted among the lower middle class. Particularly strongly represented among those taking the eure are workers and the middle-aged, among the holiday-makers those over sixty and pensioners.
The differing structure of visitor groups is reflected in their diverging demands upon the tourist trade and their opinion of the holiday resort. Deploring the lack of entertainment facilities, for example, implies something quite different in the case of a bowling club on a weekend outing and a couple of 65 year-old pensioners spending a longer holiday. lt is interesting that two-thirds of the associations/clubs turn down another - particularly a longer - visit to Boppard on account of the weekend activities which they themselves cause and desire. Over recent years Boppard has increasingly acquired the name for being a resort which, though attractive so far as the landscape is concerned, is little suited to long stays thanks to the noise of traffic and the overcrowding of visitors during weekends.
The consequence of this judgement is the insufficient use made of the accommodation industry's capacity, especially in the centre of the town, in the corporated former parishes, and generally in older establishments. They therefore lack sufficient means of their own to afford the modernization which is urgently needed (rooms with bath/shower, WC etc.) if they are to remain competitive. The high level of demand during the high season and the late season demands the provision of adequate capacity. In spite of the great number of tourists passing through, or staying for a night or two, the hotels are not fully utilized during the middle of the week, even in the high season. The situation in the gastronomic sphere, as in other aspects of the tourist industry, is very much the same.
The unequal demand upon tourist facilities determines the deployment of the labour force. A high percentage of the businesses depend solely upon family labour which can be deployed when and where required (possibly with a few additional hours worked by part-timers). The number of businesses run as a side-line is also considerable. Only the larger enterprises employ non-family, full-time labour, in part throughout the year, in part only for the season. Nevertheless, a total of about 1000 persons find full- or part-time employment in the Boppard tourist industry (about 700 if converted to full-time equivalents). This figures alone indicates the importance of tourism for the Boppard economy. A calculation of the expenditure by the tourists shows that about DM 45 million are involved, of which c. 50% accrues directly to the workforce in the form of wages or income. Assuming a multiplier of 2.5 the wealth created might be estimated at DM 115 million.
The economic significance of tourism on the one hand, and its evident structural weaknesses on the other, demand appropriate measures which will promote the standing of the town as a spa and holiday resort and which will reverse the one-sided development of recent years, thereby leading to a growth in its profitability. The location in an charming landscape still exercises its powers of attraction on Germans and foreigners alike. lt must be the task of trade and local institutions to present the varied possibilities offered by Boppard and its hinterland to individual visitor groups in appropriately designed brochures and through purposeful advertising. Obvious gaps in what is on offer (such as the programme of entertainments, recreation rooms, parking places) must be closed and the furnishing and equipment of the businesses improved. In this way the supply will be more appropriate to the price level and will prevent further lasses in the sector of the economy which is irreplaceable in the economic life of the town.