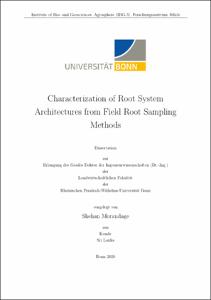 Background and objectives: The root system architecture (RSA) of a plant determines the plant’s ability to capture resources efficiently from the soil and directly linked to plant performance. The development and distribution of plant’s root systems are determined by the soil and surrounding environmental conditions. With the emerging methods of phenotyping techniques and the necessity of improving crop yield with limited resources, root phenotyping for developing new genotypes is given increasing attention to fulfill the increasing food demand of the world. Therefore, characterizing the behavior of root system with its surrounding environment and identifying beneficial traits are of attention in the agricultural industry. However, obtaining the information about root systems and their interaction with soil of all stages of root systems of field-grown crops is a challenging task because of the hidden nature of roots. Traditionally, the root information is extracted from field root sampling methods, which provide limited information about root growth and distribution. Therefore, obtaining a wide range of information such as the entire root system architecture can be identified as one of the main challenges in this regard. Moreover, the influence of soil and climatic factors on root growth has not been studied extensively. Thus, estimating distribution and functions of root systems that grow in different soil and climatic conditions are poorly understood. Root architecture models are becoming increasingly popular to study root growth and its functions successfully to understand and explain the mechanisms of root growth functions and to be used as a tool for exposing “hidden” root systems. Therefore, in this study, we demonstrate the use a RSA model to characterize root system traits from classical field root sampling schemes based on synthetic experiments and evaluate the differences in simulated root growth patterns and measured dynamic root development data in terms of different crops, soil, and environmental conditions.
Materials and Methods: The quantification of parameter sensitivities was conducted based on a synthetic experiment that mimics the root growth and root sampling procedure in the real field. The root system architecture (RSA) model CRootBox was used along with root architecture parameters to simulate winter wheat and maize root systems in a virtual field plot, similar to real field practices and subsequently used sampling methods; soil coring, root counting in trenches and weekly observation of roots through rhizotubes from a camera to sample roots virtually. Then, the sampling data was converted to root system measures to investigate the parameters of RSA that are sensitive to root system measures. Moreover, the principal component analysis (PCA) was carried out to understand the parameter correlations. The selected most sensitive parameters of RSA of winter wheat from core sampling method were estimated with the Markov chain Monte Carlo DREAM(Z S) sampler. Since the stochasticity of forward model leads to unstable log-likelihood estimates, we averaged the log-likelihood of 32 forward model runs and modified the MCMC acceptance mechanism. Furthermore, the log-likelihood was inflated to account the unknown data dependencies that cause the overfitting problem. After 15000 iterations, we compared the differences between true parameter values and posterior distribution of estimated parameters. To evaluate the influence of soil and climatic factors on root growth of winter wheat and maize crops, we carried out field experiments to measure root growth in two different soil types and collected data from the rhizotron facility in Selhausen, Germany. The collected data were used to simulate root growth based on functions implemented in CRootBox RSA model to compare the differences between measured and simulated data, and to investigate whether root simulation is representative of real field measurements.
Results: The sensitivity analysis results indicate that most of the parameters of zero-order roots are the most sensitive; especially number (NB), maximum length (maxl0 ), inter-branch distance (ln0 ), and elongation rate (r0 ) of zero-order toots and the higher-order roots are less sensitive to characteristic root system measures. The PCA analysis results indicate parameter pairs, such as number (NB)- inter-branch distance (ln0 ), gravitropism (tr0 )-insertion angle (theta0 ) of zero-order roots, are highly correlated. Bayesian sampling for posterior took a long inversion run time (3 weeks for three chains run in 32 parallel processors). The approximate posterior distributions of NB, maxl0, ln0, r0, theta0 parameters are narrowly centered and the other parameters show large parameter uncertainty. A few of the estimated parameters of zero-order roots show approximate posterior distributions that are narrowly centered around true parameter values. Yet the other zero-order and higher-order root parameters are not well resolved and show a large posterior uncertainty. The field measurements indicate significant differences in root length density (RLD) between the root growth in silty loam and stony soil. A higher root length density values were reported in root growth in silty loam soil than the stony soil of both wheat and maize crops and higher development of roots in depth below 60 cm and lower amounts of roots within the first 40 cm in silty loam soil was reported. The simulation results are not representative of measured data and the differences observed in measured data are not successfully reproduced by the model.
Conclusions: The root growth of the same type of crop could alter significantly with the growth medium and surrounding environmental conditions. However, these differences are not well incorporated into root growth models. Moreover, root length density measurements that are obtained from minirhizotron methods require reviewing thoroughly for use in simulation studies due to lack of calibration for converting root density to root length density values and the influence of tubes, soil conditions that alter root growth patterns of rhizotron methods should be investigated properly. The classical field sampling methods contain enough information about the root system traits, or root architectures parameters of zero-order roots such as NB, maxl0, ln0, r0 and Bayesian inference of core sampling data could be used to characterize some of the zero-order roots of wheat crop.