To the Unprethinkable and Back Again 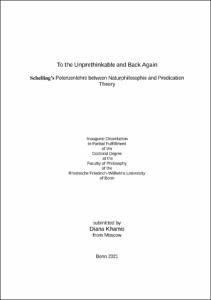 In this work, the author seeks to examine the concept of the potency in the work of F. W. J. Schelling, especially as it appears in his later texts Darstellung des Naturprozesses and Darstellung der Reinrationalen Philosophie. The work attempts to take a systematic look at the potencies: engaging existing scholarship, it proposes a working definition of potencies as placeholders, capable to be filed with anything whatsoever, and elucidates Scheling’s need to postulate such a concept in the wake of his critique of Immanuel Kant’s transcendental ideal. Through a very close reading of the Darstellund des Naturprozesses and Darstellung der Reinrationalen Philosophie, the working definition is shown to be satisfactory. Subsequently, the position of the potencies within the broader dual structure of positive and negative philosophy in late Schelling is examined and their possible relation to Schelling’s concept of God assessed. Finally, further support is given to the reading of potencies as placeholders through an examination of how Schelling’s mature potency philosophy arose from his identity philosophy, and how the flaws of the latter allowed him to develop the potency doctrines of his later life.