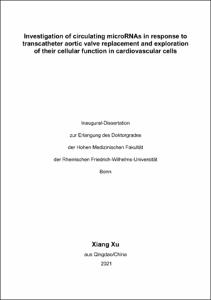 Transcatheter aortic valve replacement is an established treatment for aortic stenosis patients. However, some patients fail to develop an improvement in LVEF after TAVR. MiRs are novel biomarkers and regulators of cardiovascular disease. We aimed to explore whether circulating miRs are differently modulated in patients with different response to TAVR.
96 AS patients with impaired LVEF (<45 %) were divided into three groups according to their LVEF improvement, assessed after six months. Taqman miR array was performed in the groups of patients with no LVEF improvement and >15 % LVEF improvement. Twelve miRs were differently expressed in the discovery cohort but only miR-122 expression was significantly elevated after validation. The increase of miR-122 level was negatively associated with LVEF improvement. In vitro, treatment with H202 increased miR-122 level in endothelial-derived MVs. A vesicle RNA degradation experiment and separation by ultracentrifugation showed that miR-122 was mainly incorporated in MVs. Confocal microscopy confirmed the fluroscently-labeled MVs were taken up by CMs. Gain- and loss-of-function experiments indicated that miR-122 can induce apoptosis of recipient CMs via the transfer of MVs. Up- or down-regulation of miR-122 results in a corresponding alteration of Bcl-2 expression at mRNA level.
In summary, changes in the circulating level of pro-apoptotic miR-122 significantly correlate with LVEF improvement after TAVR in low LVEF patients. MVs can mediate the transfer of miR-122 into target CMs and further influence their biological functions.