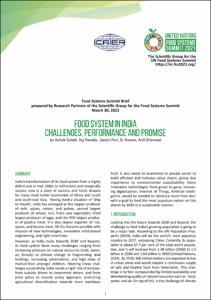 India’s transformation of its food system from a highly deficit one in mid 1960s to self-reliant and marginally surplus now is a story of success and holds lessons for many small holder economies of Africa and south and south-east Asia. Having lived a situation of ‘ship to mouth’, India has emerged as the largest producer of milk, spices, cotton, and pulses; second largest producer of wheat, rice, fruits and vegetables; third largest producer of eggs; and the fifth largest producer of poultry meat. It is also largest exporter of rice, spices, and bovine meat. All this became possible with infusion of new technologies, innovative institutional engineering, and right incentives.
However, as India looks towards 2030 and beyond, its food system faces many challenges ranging from increasing pressure on natural resources (soils, water, air, forests) to climate change to fragmenting land holdings, increasing urbanisation, and high rates of malnutrition amongst children. Meeting these challenges successfully, India needs a right mix of policiesfrom subsidy driven to investment driven, and from price policy to income policy approach, promoting agricultural diversification towards more nutritious food. It also needs to incentivise its private sector to build efficient and inclusive value chains, giving due importance to environmental sustainability. More innovative technologies from green to gene, increasing digitalization, Internet of Things, Artificial Intelligence, would be needed to ‘produce more from less’ with a goal to feed the most populous nation on this planet by 2030 in a sustainable manner.