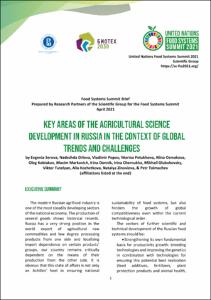 The modern Russian agrifood industry is one of the most steadily developing sectors of the national economy. The production of several goods shows historical records. Russia has a very strong position in the world export of agricultural raw commodities and low degree processing products from one side and localizing import dependence on certain products’ groups, our country remains critically dependent on the means of their production from the other side. It is obvious that this state of affairs is not only an Achilles ' heel in ensuring national sustainability of food systems, but also hinders the growth of global competitiveness even within the current technological order. An increasingly acute problem of the Russian food systems transition to the innovative path is the reduction of human resources. This trend is typical both for the scientific sector, where it is expressed in the number of researchers decrease, an aging staff (which threatens the continuity in the established scientific schools and the viability of research teams) and for the agriculture as a whole. This report examines critical areas of scientific research in Russia, which, according to the experts who participated in its preparation, will create “windows of opportunity” for increasing competitiveness in the situation of the transition of the world food systems from conventional agriculture to Agriculture 4.0. This period is key for ensuring further economic growth in Russia.