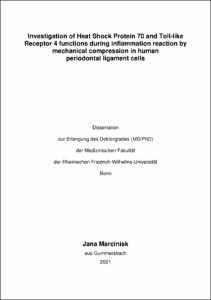 Biomechanical forces exerted during treatment with orthodontic appliances cause tensile and compressive strain within the periodontal ligament (PDL) of affected teeth followed by ischemia on the compression side. Further, a signaling cascade is initiated and proinflammatory cytokines are released, triggering host immune response with chemoattraction of immunocompetent cells. Periodontal remodeling and tooth movement by bone breakdown take place after osteoclast differentiation along the monocyte/macrophage lineage. This complex process can go to excess with adverse side effects such as tooth root resorption. Understanding the whole process and finding targets for agents minimizing its dimension is crucial for avoiding an increased risk of tooth loss in later life.
Among others, the importance of the nuclear protein High Mobility Group Protein B1 (HMGB1) in PDL cells during mechanical compression by orthodontic tooth movement has been analyzed thoroughly in different studies but research on factors such as Heat Shock Protein 70 (HSP70) and Toll-Like Receptor 4 (TLR-4) with crucial influence on HMGB1 signaling under these conditions have been missing so far or they were contradictory to previous studies. Thus the influence of these proteins on human periodontal ligament (hPDL) cells was examined with or without mechanical compression in this study. In addition, the proteins HSP70 and TLR-4 were blocked and hence inactivated by inhibitors during the experiments performed for unravelling their role and function.
HSP70 inhibition resulted in decreased proliferation and viability but increased apoptosis and necrosis of hPDL cells plus increased monocyte adhesion and osteoclastic differentiation. For experiments performed with mechanical compression, apoptosis and necrosis, cytokine expression, monocyte adhesion and osteoclastic differentiation were significantly increased upon additional HSP70 inactivation in comparison to cells stimulated with mechanical compression alone. In contrast, cytokine expression, monocyte adhesion and osteoclastic differentiation were significantly decreased upon additional TLR-4 inactivation in comparison to cells stimulated with mechanical compression alone.
In conclusion, HSP70 does exhibit a cytoprotective effect on hPDL cells concerning proliferation and viability in presence or absence of mechanical compression. Subsequent proinflammatory signaling, monocyte adhesion and osteoclastic differentiation are initiated via TLR-4 interaction. Thus both proteins have therapeutic potential to be promising targets for prevention of adverse side effects during orthodontic tooth movement.