‘Forced to Green’ or ‘Willingness to Green’? 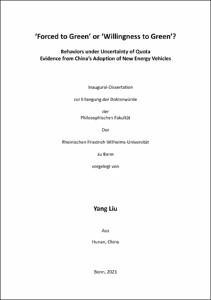 This research, in term of the macro-perspective, covers the politics, environment, and economics, by integrating the macro with the micro-perspectives, digging into individuals’ decision making. Based on the literature review of the adoption of new energy vehicles, it elaborates two perspectives for the further studies. Firstly, the data fusion combines the stated and revealed preference. Secondly, it raises the question of disparity between the willingness to pay and actual payment. Accordingly, the study is based on samples of two groups, experiment group with a license plate and controlled group without a license plate respectively. Firstly, the function mechanisms of WTP and AP are different, and there is a phenomenon of the “trap of subjective willingness”. Importantly, there is a disparity between WTP-AP, the higher uncertainty of utilization and the more learning opportunity with a delayed cost, the higher disparity between the WTP/AP. Secondly, the adoption of NEVs is forced to green under the multi-exclusive quota, simultaneously, there are externalities and spillover caused by the multi-exclusive quota.
After the literature review and empirical study, there are five findings. Firstly, for the variation of WTP, it cannot draw the conclusion that the private good’s variation is smaller than a public good in the meta-analysis, but it supports that the coefficient variation in the experiment group is higher than the counterpart in the controlled group. Secondly, for the different mechanisms between WTP and AP, the higher green perception of the NEVs, the higher WTP, but this positive relationship for WTP is not applicable to the AP, which indicates there is a phenomenon of the “trap of subjective willingness”. However, it supports the hypothesis the higher certainty of the charging location, the higher WTP, this is applicable to both WTP and AP. Besides, it found that the income is a necessary but insufficient condition for the adoption of NEVs.
Thirdly, contingent on the theory framework of commitment cost for the disparity between WTP/AP, it extends the previous research scope, due to the product utilization is strongly connected with the product or service chosen in its study and laboratory experiment, when the focus of uncertainty moves from the monetary value to the utilization, it cannot reach the same conclusion that the higher uncertainty of utilization, the higher disparity between the WTP/AP, which is also demonstrated the importance and necessity of category of product raised in the first hypothesis, public or private good. Additionally, it extends the previous precondition of zero learning cost in the theory of commitment cost, an extension with a learning cost is embedded in behaviors, it finds that the more learning opportunity with a delayed cost, the higher disparity between the WTP/AP.
Fourthly, it finds that the adoption of NEVs is forced to green in the model of multi-exclusive-quotas with a constant TAC and absent of transferable market, the more times participating in the lottery of conventional vehicles, the higher possibility of purchasing NEVs. Additionally, in term of macro-perspective in multi-exclusive quotas, the higher cost and smaller probability of one sub-quota, the higher rate of adoption for another sub-quota. Namely, the adoption of NEVs, is positively associated with a higher bidding price and lower lottery winning rate. Fifthly, in term of externalities, it finds that there is a spillover effect under the multi-exclusive quotas, which counteract the initial target of reducing the volume of conventional vehicles and increasing the volume of NEVs. Besides, there is an externality of discards in the multi-exclusive quotas. The higher cost of the bidding, the higher rate of discards; The lower the lottery rate of winning a license plate, the lower rate of discarding.