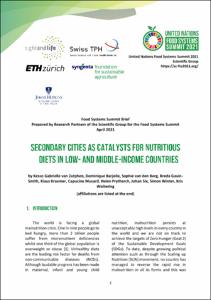 The world is facing a global malnutrition crisis. One in nine people go to bed hungry, more than 2 billion people suffer from micronutrient deficiencies whilst one third of the global population is overweight or obese [1]. Unhealthy diets are the leading risk factor for deaths from non-communicable diseases (NCDs). Although laudable progress has been made in maternal, infant and young child nutrition, malnutrition persists at unacceptably high levels in every country in the world and we are not on track to achieve the targets of Zero Hunger (Goal 2) of the Sustainable Development Goals (SDGs). To date, despite growing political attention such as through the Scaling up Nutrition (SUN) movement, no country has managed to reverse the rapid rise in malnutrition in all its forms and this was even before the disruption caused by the COVID-19 pandemic. The coexistence of undernutrition, micronutrient deficiencies and overnutrition in countries, households and even within individuals, referred to as the triple burden of malnutrition, signals a major shift in the global burden of malnutrition with great variations and inequalities at different levels i.e., age, gender, geographical location (urban-rural) and other sociodemographic factors.
As urbanization rates across the globe are rising and there is a continued push to decentralise decision-making power to levels that are closer to the people served, cities are gaining an increasingly important role in the global malnutrition crisis and offer entry points for food system transformation. Besides the role of cities in ensuring adequate diets and managing the rising burden of NCDs, cities could also play a key role in enhancing resilience to food security shocks. This paper discusses the challenge of the growing triple burden of malnutrition in urban contexts and advocates for the role of secondary cities as game changers to transform city region food systems. Secondary cities are introduced as emerging players in pioneering nutrition-centered food systems interventions, and in monitoring and evaluating their impacts for later improvements and out-scaling.