The Future of Small Farms: Innovations for Inclusive Transformation 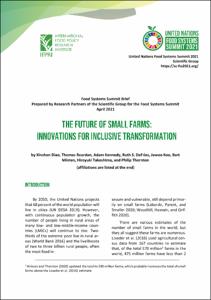 By 2050, the United Nations projects that 68 percent of the world population will live in cities (UN DESA 2019). However, with continuous population growth, the number of people living in rural areas of many low- and low-middle-income countries (LMICs) will continue to rise. Two- thirds of the extreme poor live in rural areas (World Bank 2016) and the livelihoods of two to three billion rural people, often the most food in-secure and vulnerable, still depend primarly on small farms (Laborde, Parent, and Smaller 2020; Woodhill, Hasnain, and Griffith 2020).
There are various estimates of the number of small farms in the world, but they all suggest these farms are numerous. Lowder et al. (2016) used agricultural census data from 167 countries to estimate that, of the total 570 million1 farms in the world, 475 million farms have less than 2 hectares (ha), dominating agriculture in most LMICs, where farm sizes continue to fall. Africa south of the Sahara has the highest rural population growth rate globally, and thus the number of small farms is expected to increase more than in other regions. Africa’s share of total world rural poverty is also expected to rise from 39.6 percent in 2015 to 58.1 percent in 2050 (Thurlow, Dorosh, and Davies 2019). Transforming Africa’s agriculture sector is thus a priority embodied in the Malabo Declaration on Accelerated Agricultural Growth and Transformation for Shared Prosperity and Improved Livelihoods (AU 2014). But to meet the Malabo goals and to achieve multiple SDGs in all LMICs by 2030, creating an enabling environment where small farms are included in and benefit from rapid growth and transformation of agrifood systems is urgent (Barrett et al. 2020).