Soviet and contemporary Russian foreign policy comparative perspective
Dokumentanzeige
JavaScript is disabled for your browser. Some features of this site may not work without it. 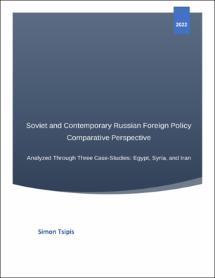 What are the main similarities and distinctions in Russian foreign policy conduct before and after the dissolution of the Soviet Union? This question will be addressed through comparative analysis between the Soviet and contemporary Russian foreign policy towards three case-studies – Egypt, Iran, and Syria. Our study is aimed to compare the foreign policies of Soviet Union with contemporary Russia in order to detect policy features and behavioral patterns and to confirm, or disprove, by empirical analysis, theoretical assumptions about foreign policy sources of conduct and to identify commonalities and differences between the two eras and political regimes. Foreign policies towards Syria, Egypt, and Iran, which compose the focus of our comparative research are to be compared during both periods of the existence of the Soviet and later Russian state. By analyzing this issue, another significant point can be revealed regarding how the change of regime in Russia influenced its foreign policy in the Middle East.