Gymnosperm woods of the Upper Jurassic Morrison Formation in the Western Interior of North America
View Item
JavaScript is disabled for your browser. Some features of this site may not work without it. 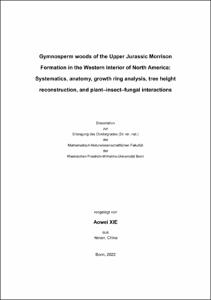 Silicified wood is one of the most important types of plant fossils that can be used for reconstructing terrestrial ecosystems and paleoclimate in deep time. Abundant fossil woods occur in the world-famous Upper Jurassic Morrison Formation of Western Interior of North America. However, the normally poorly preserved internal structures of the woods are unattractive to formal paleobotanical study, making the diversity of the Morrison woods understudied. Here, the primary objectives of this dissertation are the taxonomic identification and anatomical study of newly discovered silicified woods with well-preserved cellular structures from the Morrison Formation in Utah and Wyoming to better understand the diversity of the Morrison woods during the Late Jurassic times. In addition to the taxonomy and anatomy, analyzing growth rings, establishing height–diameter growth models for ancient trees, describing multitrophic interactions among plants, insect, and fungi, as well as identifying the preservation potential of organic compounds in fossil wood were carried out.
In chapter 2, for instance, a systematic paleobotanic study on a fossil log from Miners Draw in the Morrison Formation of Utah recognizes the most southerly occurrence of Xenoxylon tree in North America so far and confirms that Xenoxylon trees were not only limited to the cool circumpolar zone. Furthermore, the reconstruction of ancient tree height on the basis of maximum preserved diameter was applied to this fossil log, which measured 90 cm in diameter and resulted in a reconstructed tree height of ca. 40 m using our newly established height–diameter growth models for conifer-like trees. When a closer look was taken at the wood thin sections of the Miner Draw log, in chapter 4, we were able to describe abundant white rot features and fossil mycelia with typical Basidiomycota characters, which represents now the first reliable record of Jurassic basidiomycetes in Utah. Similar white rot characters were also noticed in a fossil wood from an araucariaceous fossil log in Rainbow Draw, 30 km northwest of the Miners Draw, along with two insect boreholes (chapter 3). To understand the preservation quality of the Morrison woods, in chapter 6, a silicified wood with visible color zones in the Morrison Formation in Utah was studied, that is, the preservation potential of wood organic compounds was investigated, and the related primary and secondary trace element distribution were analyzed. Outside of Utah, an araucariaceous wood flora in the Upper Jurassic Morrison Formation in the Howe-Stephens Quarry of north-central Wyoming was described in chapter 7, which reconstructed these ancient trees based on their maximum preserved diameters using our newly established araucariaceous height–diameter growth models given in chapter 5.
In summary, the new knowledge related to paleobotany of Morrison Formation in this dissertation contributes to further understand the floristics of ancient forest ecosystems and paleohabitats during the Morrison times, as well as the preservation of Morrison woods.