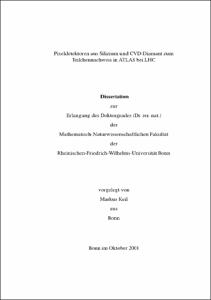 The ATLAS experiment at the future Large Hadron Collider at CERN uses a silicon pixel detector as the innermost tracking device. Measurements characterising the prototype ATLAS pixel readout chip FE-A/C are described and compared with the requirements of ATLAS. The performance of the chip with radiation tolerant silicon sensors was studied in a test beam at CERN. Furthermore assemblies with diamond sensors have been studied in the laboratory and the test beam. Diamond is a promising sensor material for hadron colliders due to its radiation hardness. The influence of the limited charge carrier lifetime on the detector performance has been examined.