Geomorphic Response to Environmental Change
View Item
JavaScript is disabled for your browser. Some features of this site may not work without it.

The Imprint of Deforestation and Agricultural Land Use on the Contemporary Landscape of the Pleiser Hügelland, Bonn, Germany 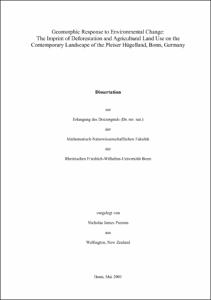