The role of mass movements for slope evolution
View Item
JavaScript is disabled for your browser. Some features of this site may not work without it.

The role of mass movements for slope evolution

conceptual approaches and model applications in the Bonn area 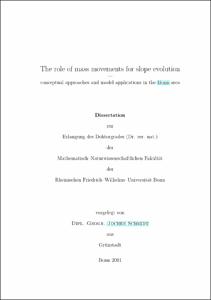 Understanding slope processes and slope systems in different timescales is focused by a range of approaches from different disciplines. This work is based on a multi-disciplinary research approach within the project SFB350 `Interactions between and Modelling of Continental Geo-Systems'. Previous work indicate, that mass movements have a considerable spatial and temporal extent in the Bonn area. Moreover, the spatial pattern of these landslides indicate, that they play an important role in the superordinated system of hillslope evolution. The fundamental research objective of this work is the assessement of mass movement processes as part of hillslope systems of the Bonn area. It is queried how the geomorphological effectiveness of mass movements on hillslopes over longer timescales can be quantified, and more general, how slope development, affected by mass movements can be modelled.
The methodological approach included (1) local observations and analyses of individual landslide objects, (2) analyses of data from two larger field sites, and (3) aggregation techniques of past climate conditions for the Bonn area. The analyses led to simplified models of lithological boundary conditions for the landslides and for the field sites. Three scenarios of climatic variability for the Bonn area were developed for the last 500 years, based on statistical analyses of proxy data. For each scenario, models of typical annual variation of precipitation and temperature were derived. Modelling approaches on different scales were applied. Slope stability models were used to reconstruct failure conditions for the landslide objects under investigation. A simplified model of hillslope hydrology and slope stability was developed to analyse stability of hillslopes for different climatic conditions. This model was used to calculate failure probability in a scenario approach for three sensitive hillslopes in combination with the identified climatic scenarios. Geomorphometric techniques, including hillslope profile analyses, and a simplified model of hillslope development were applied to model hillslope evolution of one field site (catchment `Melbtal'). A conceptual model for hillslope evolution of the Melbtal was developed on the basis of the results, combining the concept of ergodicity with changing system behaviour.
Movement monitoring and and stability analyses indicated the sensitivity of hillslopes in the Bonn area to groundwater fluctuations caused by intensive precipitation phases. These results suggest the application of scenario models to analyse the sensitivity of the hillslopes to changing climatic conditions. The hillslope evolution model indicated five evolutionary stages for hillslope systems of the Melbtal, according to varying material sensitivity, climatic changes, dominant slope processes, and process coupling. Generally, the model results show a transition from a hillslope systems in the upper valley, which is not affected by landslides to a hillslope system in the lower valley, which is dominated by hillslope instabilities and landslides. The change in hillslope processes can be explained by different lithologic boundary conditions. The valley-side slopes affected by landslides were chosen as boundary conditions for the scenario approach (see above) to investigate the sensitivity of the hillslopes to mass movements. The results from scenario modelling led to different failure probabilities for the modelled hillslopes, which could be related to average gradient. The failure probabilities, however, showed a complex pattern in relation to the modelled climatic phases, as indicated by frequency spectra of failure probability. The sensitivity of a hillslope to climatic variation is not correlated with average failure probability, i.e. the hillslope with lowest failure probability showed high sensitivity to changing climate patterns. The scenario models, hillslope profile parameters, and field evidence showed, that the reaction of the hillslope system to changing boundary conditions (material sensitivity) is significantly different for the valley side slopes. Hillslope profile parameters indicate, that a critical system state might be reached by interactions of the hillslope (landslide) system with the fluvial system.
The research approach exhibit a series of deficits and error sources. It can be assumed that statistical errors and technical errors are of minor relevance, as the topic of this study is related to relatively large spatio-temporal scales. Certainly, a simplified system of `real' hillslope evolution was modelled. The question arise, if the used model approach is an oversimplification for the complexity of the considered landform system. Studies on similar catchments in the study area could validate the results derived in this study. Validating the results against field data is certainly necessary, but not carried out in this study, because of missing data (e.g. dating results).
The applied methods and the results indicated several methodological issues and deliveries within the wider framework of the assessment of hillslope systems. Hillslope profile analysis gave evidence of spatial structures in hillslope systems, which can be transfered in time using the conceptual framework of ergodicity. It could be shown, that combining these results with simplified hillslope evolution models deliver patterns of system behaviour for the process-response system of hillslopes. The scenario model results indicated patterns in process behaviour (in this case landslide processes), which are related to varying boundary conditions and spatial structure of the modelled hillslope. Although no quantification of process rates for varying climatic conditions could be reached, the potentials of this technique for assessing sensitivity of geomorphic processes to controlling factors were shown. Certainly, conceptual approaches and scenario models, require field evidence as input data. With respect to the considered scale, this study used generalised boundary conditions, here termed as `Geo-structures', as field evidence (e.g. climate scenarios). To accomplish this generalisation task, spatial and temporal aggregation techniques are required, which are only partly available today, e.g. by statistical methods and geomorphometric generalisation techniques.
Based on the applied methodologies, a general framework for assessing geomorphic systems is sketched. It is proposed to model stages of geomorphic systems, which are described by higher-scale patterns in `Geo-structures' produced by changing process interactions within the related geomorphic evolutionary system (patterns in system behaviour). Different behaviour of individual processes for the systems stages can be simulated by model scenarios.