Entwicklung eines Pixelchips für das ATLAS Experiment am Large Hadron Collider am CERN
Dokumentanzeige
JavaScript is disabled for your browser. Some features of this site may not work without it. 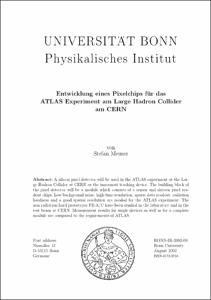 A silicon pixel detector will be used in the ATLAS experiment at the Large Hadron Collider at CERN as the innermost tracking device. The building block of the pixel detector will be a module which consists of a sensor and sixteen pixel readout chips. Low background noise, high time resolution, sparse data readout, radiation hardness and a good spatial resolution are needed for the ATLAS experiment. The non radiation hard prototypes FE-A/C have been studied in the laboratory and in the test beam at CERN. Measurement results for single devices as well as for a complete module are compared to the requirements of ATLAS.