Preparation, properties and pharmacological testing of sulfonic acid nitrophenyl esters
View Item
JavaScript is disabled for your browser. Some features of this site may not work without it. 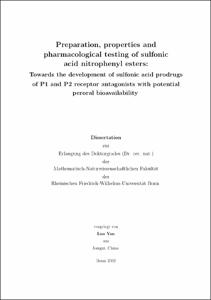 Many pharmacologically active P1 and P2 receptor antagonists contain polar sulfonate groups, which are in many cases essential for their pharmacological activities and/or selectivities.
Nitrophenyl sulfonate esters of P1 (adenosine) receptor antagonists and P2 receptor antagonists derivatives, 8-p-sulfonamidophenylxanthine derivatives were successsfully synthesized by using new methods which were never reported before.
In vitro stability tests of these m-nitrophenyl sulfonate esters of p-sulfophenylxanthine derivatives were performed in chemical and biological media. It was concluded that these synthesized xanthine esters are relatively stable, and can be hydrolysized to the parent drugs in the rat liver through enzymatic biotranformation, which reached the requirement of potent prodrug.
All the synthesized sulfonate esters and sulfonamidoxanthine derivatives were tested in radioligand binding assays for their affinity to A1, A2A and A3 adenosine receptor. It was proven that these compounds are potent A1 and A2A antagonists. The sulfonate esters of P2 antagonists were also tested at P2Y2 receptor of NG108-15 cells, and it was proven that compound 4-benzoylamino-benzenesulfonic acid m-nitrophenyl ester is a very potent P2Y2 antagonist, since it has an IC50 of 8.6 µM. From the pharmacological testing it can be concluded that with the increase in the lipophilicity of the sulfonate derivatives, the P1 and P2 antagonistic activity of these sulfonate derivatives increases as well.