Bildgebung mit DEPFET-Pixelmatrizen für autoradiographische Anwendungen
Dokumentanzeige
JavaScript is disabled for your browser. Some features of this site may not work without it. 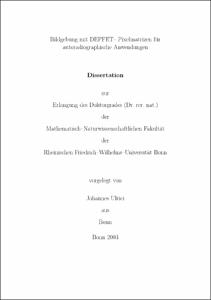 DEPFET Pixel Sensors offer a very good spatial, time and energy resolution at the same time, thus opening new possibilities in low noise biomedical imaging as well as in particle physics and astronomy. In the DEPFET pixel concept a p-JFET is integrated into a fully depleted high ohmic silicon substrate in every pixel cell such that the absorbed radiation directly modulates the channel current. This leads to a very low noise operation at room temperature. A DEPFET Pixel Bioscope system based on a 64x64 DEPFET Pixel matrix has been developed for real time digital autoradiography and will be described here. Studies on the imaging performance of DEPFET pixels such as spatial and energy resolution and first measurements with tritium labeled biological samples are presented.