Tectono-sedimentary evolution of the northern Upper Rhine Graben (Germany), with special regard to the early syn-rift stage
Dokumentanzeige
JavaScript is disabled for your browser. Some features of this site may not work without it.

Tectono-sedimentary evolution of the northern Upper Rhine Graben (Germany), with special regard to the early syn-rift stage 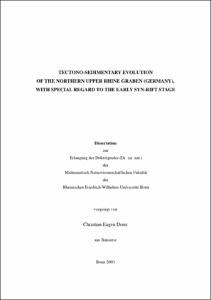 • The present study focuses on the tectono-sedimentary interactions during the Cenozoic syn-rift stage of the northern Upper Rhine Graben. A special regard is given to the early syn-rift phase. The analysis is based on reflection seismic and well log information, which were generously made available by the German oil industry. The study method is a combination of the sedimentary models for extensional basins (Gawthorpe et al., 1994; Howell & Flint, 1996) and the base-level sequence stratigraphy (Cross & Lessenger, 1998). This method has proved to be a reliable tool for the structurally controlled settings of the northern Upper Rhine Graben.
1) Overall interpretation of the Cenozoic evolution
• A large-scale interbasin transfer zone subdivided the northern Upper Rhine Graben into a southern and a northern halfgraben (sub-basin). The sub-basins have opposing tilt directions and their sedimentary fill is asymmetric. The transfer zone and the sub-basins are subdivided into fault blocks, which influenced sedimentation at subordinate scale.
• The sediments of late Eocene to early Miocene age were classified into four large-scale base-level cycles. These reflect the variation of accommodation space and sediment supply with time. The base-level cycles are compared with the subsidence curves, calculated for a well in the northern Upper Rhine Graben, and with the regional variations in relative sea-level (Hardenbol et al., 1998). The Cenozoic large-scale base-level cycles of the northern Upper Rhine Graben were generated by the interplay between the tectonic activity of the graben and the major tectono-eustatic events recorded in several European Basins.
2) The early syn-rift depositional history
• The early syn-rift succession (late Priabonian to early Rupelian) includes the Eocene Clay (where deposited), the Pechelbronn Beds, and the Rupelian Clay. This succession was deposited on tilt-blocks/halfgrabens bounded by growth faults. The halfgraben fill is wedge-shaped, and was generated during fault activity and block rotation.
• The interbasin transfer zone was already active during the early syn-rift stage. It created an axial depositional gradient, dipping into the southern sub-basin, and represented a barrier between the two sub-basins. At subordinate scale, tilt-block/halfgrabens produced minor depocentres and depositional gradients. A low-displacement segment of the western border fault created a sediment input point, as drainage systems entered the graben through it. These structural features influenced accommodation space and sediment supply at different scales.
• The early syn-rift succession was classified into two large-scale cycles (C-I-1 and C-I-2). The C-I-1 cycle is asymmetric, and contains the Lower Pechelbronn Beds and the lower part of the Middle Pechelbronn Beds. The C-I-2 cycle is symmetric and is composed of the upper part of the Middle Pechelbronn Beds, the Upper Pechelbronn Beds and the lower part of the Rupelian Clay. The characteristics of these base-level cycles (the ratio between accommodation space to sediment supply) varied as a function of the position within the tectonic framework of the graben. Even though the large-scale base-level cycles were probably influenced by regional variations in relative sea-level (affecting several European basins), the distribution of depositional systems and the palaeogeographic settings of the northern Upper Rhine Graben were controlled by the local syn-sedimentary tectonic structures.