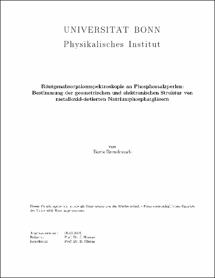 Sodium metaphosphate glasses doped with transition metal oxides show characteristic colors. X-ray Absorption Spectroscopy (XAS) investigations provide information whether the coloration stems from different electronic transitions or changes in the geometrical structure of the glasses. Even though the violet color of MnOy-doped glasses is considered as an evidence for Mn3+-ions, Mn K-XAS reveals that the majority of the manganese ions are in the oxidation state +II and have a mixed coordination of four and six oxygen atoms, respectively. The oxygen coordination around the nickel ions in NiO-doped glasses with different metall oxide concentrations is always six. The change of color from citreous to auburn with increasing nickel oxide content is attributed to a systematic change in the bonding characteristic from mainly ionic-like to a small but significant contribution of covalent-like bonding. Analysis of higher coordination shells provides no indication of the formation of metal oxide clusters.