Study of a Light Standard Model Higgs Boson in the t¯tH<sup>0</sup> Channel with ATLAS at LHC and Decay-Mode Independent Searches for Neutral Higgs Bosons with OPAL at LEP
Dokumentanzeige
JavaScript is disabled for your browser. Some features of this site may not work without it. 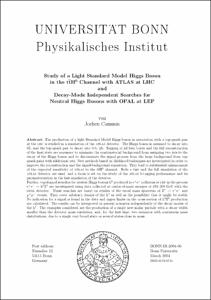 The production of a light Standard Model Higgs boson in association with a top-quark pair at the LHC is studied in a simulation of the ATLAS detector. The Higgs boson is assumed to decay into bb, and the top-quark pair to decay into lνb jjb. Tagging of all four b-jets and the full reconstruction of the final state are necessary to minimize the combinatorial background from assigning two jets to the decay of the Higgs boson and to discriminate the signal process from the large background from top-quark pairs with additional jets. New methods based on likelihood techniques are investigated in order to improve the reconstruction and the signal-background separation. They lead to substantial enhancement of the expected sensitivity of ATLAS to the ttH0 channel. Both a fast and the full simulation of the ATLAS detector are used, and a focus is set on the study of the ATLAS b-tagging performance and its parameterization in the fast simulation of the detector.
Further, topological searches for neutral Higgs bosons h0 produced in e+e- collisions at LEP in the process e+e- to h0Z0 are investigated using data collected at center-of-mass energies of 183-209 GeV with the OPAL detector. These searches are based on studies of the recoil mass spectrum of Z0 to e+e- and μ+μ- events. They cover arbitrary decays of the h0 as well as the possibility that it might be stable. No indication for a signal is found in the data and upper limits on the cross section of h0Z0 production are calculated. The results can be interpreted in general scenarios independently of the decay modes of the h0. The examples considered are the production of a single new scalar particle with a decay width smaller than the detector mass resolution, and, for the first time, two scenarios with continuous mass distributions, due to a single very broad state or several states close in mass.