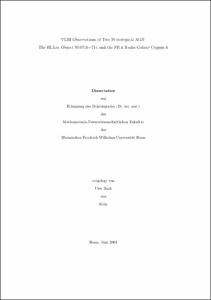 This work will summarise recent results from VLBI observations of two radio sources that are the most representatives of their AGN class: the BL Lac object 0716+714 and the FRII radio galaxy Cygnus A. Both are important test objects and they offer the opportunity to study the physics of jets from two different perspectives. A nearly face-on view is offered by the blazar 0716+714 and an edge-on view by Cygnus A.
I will discuss the kinematical properties of the jets and compare them with different jet models. A detailed analysis of the spectral properties of the inner few parsecs of the core region of Cygnus A strongly supports the existence of a circumnuclear absorber as it is predicted by unifying schemes. 0716+714 is a famous intraday variable source. Multi-epoch Space VLBI observations combined with simultaneous flux density measurements with the 100 m Effelsberg were performed. The single-dish analysis shows variability in total intensity and linear polarisation between the epochs, and the VLBI imaging reveals for the first time that the origin of the variability is at the core component of 0716+714.