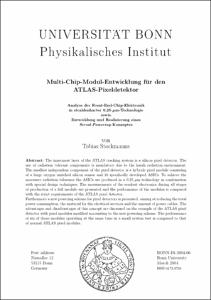 The innermost layer of the ATLAS tracking system is a silicon pixel detector. The use of radiation tolerant components is mandatory due to the harsh radiation environment. The smallest independent component of the pixel detector is a hybride pixel module consisting of a large oxygen enriched silicon sensor and 16 specifically developed ASICs. To achieve the necessary radiation tolerance the ASICs are produced in a 0.25~$\mu$m technology in combination with special design techniques. The measurements of the readout electronics during all stages of production of a full module are presented and the performance of the modules is compared with the strict requirements of the ATLAS pixel detector.
Furthermore a new powering scheme for pixel detectors is presented, aiming at reducing the total power consumption, the material for the electrical services and the amount of power cables. The advantages and disadvantages of this concept are discussed on the example of the ATLAS pixel detector with pixel modules modified accounting to the new powering scheme. The performance of six of those modules operating at the same time in a small system test is compared to that of normal ATLAS pixel modules.