Bone histology and growth of the prosauropod dinosaur Plateosaurus engelhardti MEYER, 1837 from the Norian bonebeds of Trossingen (Germany) and Frick (Switzerland) 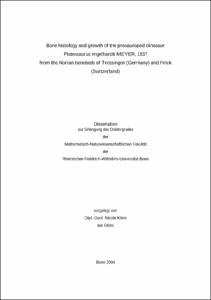 Predominately long- and flat bones of the prosauropod Plateosaurus engelhardti from the Norian localities of Trossingen and Frick were sampled for paleohistological study. Both localities yield rich material of adult individuals with a body size of 4.70 m to 10 m.
Altogether 50 bones from approximately 27 individuals were sampled by different methods (coring, cross sectioning, analysis of existing fracture surfaces). Most bones consist of the laminar fibro-lamellar complex, always cyclically interrupted by lines of arrested growth (LAGs). In some bones, the laminar fibro-lamellar complex changed in the exterior cortex to lamellar-zonal bone, later grading into avascular lamellar bone. Thus, growth was clearly determinated in P. engelhardti.
Like most other dinosaurs Plateosaurus engelhardti shows high growth rates, indicating an advanced (“dinosaurian”) physiology. On the other hand, Plateosaurus engelhardti shows a strong dependency on environmental conditions. Additionally, its final size is represented by a very broad range (between 6.5 m to 10 m). Both reflect a more reptilian growth pattern as is known from other dinosaurs. It marks the basal status of Plateosaurus engelhardti. Thus, in Plateosaurus the foundation is seen for the evolution of gigantism in sauropods.