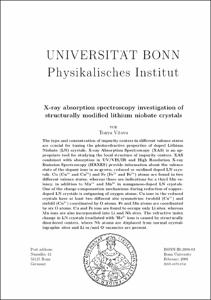 The type and concentration of impurity centers in different valence states are crucial for tuning the photorefractive properties of doped Lithium Niobate (LN) crystals. X-ray Absorption Spectroscopy (XAS) is an appropriate tool for studying the local structure of impurity centers. XAS combined with absorption in UV/VIS/IR and High Resolution X-ray Emission Spectroscopy (HRXES) provide information about the valence state of the dopant ions in as-grown, reduced or oxidized doped LN crystals. Cu (Cu 1+ and Cu 2+) and Fe (Fe2+ and Fe3+) atoms are found in two different valence states, whereas there are indications for a third Mn valency, in addition to Mn2+ and Mn3+ in manganese-doped LN crystals. One of the charge compensation mechanisms during reduction of copper-doped LN crystals is outgassing of oxygen atoms. Cu ions in the reduced crystals have at least two different site symmetries: twofold (Cu1+) and sixfold (Cu2+) coordinated by O atoms. Fe and Mn atoms are coordinated by six O atoms. Cu and Fe ions are found to occupy only Li sites, whereas Mn ions are also incorporated into Li and Nb sites. The refractive index change in LN crystals irradiated with 3He2+ ions is caused by structurally disordered centers, where Nb atoms are displaced from normal crystallographic sites and Li or/and O vacancies are present.