Analysis of ceramidase maturation, autocatalytic processing and interaction with Sap-D 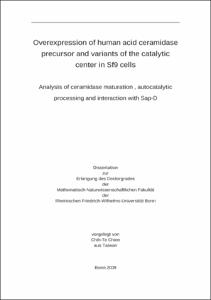 Ceramides are important building blocks of eukaryotic membranes and primarily serve as membrane anchors of GSLs and sphingomyelins. The lysosomal degradation of ceramide is catalyzed by acid ceramidase and requires the interaction with Sap-D in vivo. Acid ceramidase is synthesized as a monomeric precursor followed by proteolytic processing into mature enzyme which is a heterodimer consisting of α- and β- subunits. The main goal of this study was to establish the recombinant expression in insect cells and purification of only the human acid ceramidase precursor for further crystallization studies. In order to generate the recombinant baculovirus expressing only the human acid ceramidase precursor, a fusion protein was constructed with SEAP. However, this strategy failed and proteolytic processing of acid ceramidase still occurred. Subsequently, the amino acids near the cleavage site were substituted by point mutation to avoid proteolytic processing. It only worked with the mutant of the nucleophilic Cys143, which did not show any proteolytic cleavage, whereas all other variants were still cleaved. Therefore, proteolytic processing of acid ceramidase seems to occur autocatalytically by self-cleavage into α- and β- subunits, similar to other members of the N-terminal nucleophile (Ntn) hydrolase superfamily. We established the overexpression and purification of the variant Cys143Ala fusion protein to produce a large amount of acid ceramidase precursor for further crystallization experiments.
Treatment of wild-type fusion protein “SEAP-haCerase” with the cysteine protease inhibitor, p-chloromercuribenzoic acid (pCMB), inhibited both self-cleavage and enzymatic activity. More importantly, Cys143 residue was also confirmed to be in a free state. Therefore, we suggest that acid ceramidase also belong to the superfamily of Ntn-hydrolases.