How to predict the future? On niches and potential distributions of amphibians and reptiles in a changing climate 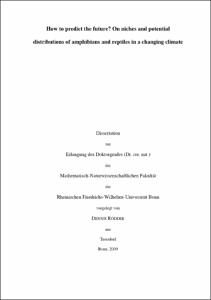