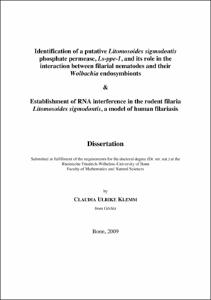 Filariasis is a vector-borne disease that affects 200 million individuals in the tropics, a large number of them seriously, where the disease leads to blindness (onchocerciasis) or elephantiasis (lymphatic filariasis). The Wolbachia, which are mutualistic endobacteria of most filarial nematodes, are essential for embryogenesis and larval development into adults and were thus identified as new target for anti-filarial drug development. Still, little is known about the molecular details of the symbiosis between Wolbachia and its filarial host but nematode genes that respond to an anti-wolbachial treatment may play important roles in the symbiosis. Therefore, the aim of this thesis was first to screen for such genes that might be involved in the symbiosis, and second to establish RNAi in the rodent filaria Litomosoides sigmodontis to study the function of filarial genes.
Differential display PCR was used to detect several candidate genes that are up-regulated upon antibiotic treatment. One of these genes, Ls-ppe-1, was confirmed to be up-regulated over the treatment time and transcripts remained elevated one month after the treatment had been stopped, demonstrating a long-term alteration in the transcriptional state of the gene. The role of Ls-ppe-1 in the symbiosis may relate to a possible direct or indirect involvement in nucleotide metabolism. In contrast to other endosymbionts that have undergone gene reduction, Wolbachia has retained the ability to synthesize nucleotides (in addition to other metabolites). Potentially the phosphate permease provides the Wolbachia with phosphate as part of the mutualistic symbiosis
The mitochondrial HSP60 was found to be up-regulated in immunohistochemical stained sections of O. volvulus after the depletion of Wolbachia by doxycycline treatment. The mRNA levels of filarial hsp60 in O. volvulus, quantified by real time PCR, were significantly increased after antibiotic treatment compared to untreated control worms. The results lead to the hypothesis that the increased expression of HSP60 is due to a disruption of the homeostasis of metabolic pathways for which Wolbachia may be needed.
RNAi in adult worms of the rodent filaria L. sigmodontis was established and optimized. The actin gene was successfully knocked-down, whereas the transcript levels of Ls-hsp60 and Ls-gst2, used as controls to measure off-target effects, were not reduced. Soaking of nematodes with dsRNA coding for the C. elegans yolk receptor (Ce-rme-2), which has no orthologues in filaria, did not affect Ls-act transcription, demonstrating that the reduction of Ls-act is specific and not due to toxicity of dsRNA or off-target effects. The inhibition of Ls-act persisted for 72 hours, the length of the observation time. Two additional phenotypes were seen: first, the adult nematodes observed 48 and 72 hours after the beginning of the experiment showed paralysis by being stretched out and having slower movements, second, the release of microfilariae was significantly inhibited after soaking with dsRNA.
The use of lower concentrations of dsRNA than those previously reported for RNAi in B. malayi as well as the establishment of proper controls for off-target effects could make RNAi a possibility to study the function of filarial genes. However, there are issues with RNAi in filarial nematodes and other parasitic nematodes, namely that their genomes appear to lack the genes to allow spreading of the dsRNA signal from cell to cell, indicating that the process is still hit-or-miss, depending on the gene to be silenced and/or the method of delivery.