Consequences for Estimating the Post-Mortem Interval 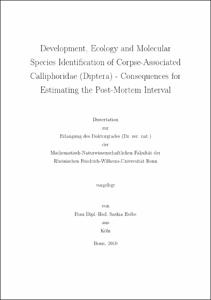 Forensic entomology is the application of entomological knowledge in processing forensic cases involving arthropod infested corpses. The question arising most frequently concerns the estimation of a post-mortem interval (PMI). This endeavour can be approached in two different ways. Firstly, the succession of insect colonization can give reasonable evidence about the time interval of a decomposition period, as different species prefer different decomposition stages, which are related to temperature and time. Secondly, the age of the most developed blow fly larvae (Diptera: Calliphoridae) can indicate a minimum post-mortem interval since blow flies are usually the first colonizers on carcass. To calculate the age of blow fly larvae developing on a corpse, their developmental progress has to be determined as accurately as possible. Development is strictly temperature dependent as blow fly larvae are poikilothermic animals. Thus, combining the developmental progress and the temperature influencing it, the developmental time of the larvae can be calculated. The commonly used methods for calculating larval age are isomegalen diagrams and the concept of accumulated degree hours (ADH). These ADHs are the product of a certain time interval and the corresponding temperature. The ADH method assumes a linear relationship between the developmental rate (1/development time) and the temperature. However, the relationship is only linear in certain temperature thresholds. Using the method in temperature ranges beyond these thresholds leads to miscalculations. A second problem in estimating the PMI based on the age of the most developed blow fly larvae is the estimation of the time interval between time of death and first colonization by blow flies. For corpses exposed outdoors and in an easily accessible environment, this time interval can be neglected as the blow flies will start depositing their immediately after death. However, when corpses are found inside a room or were wrapped in plastic bags and stored in some kind of container it is difficult to estimate the time interval between exposure of the corpse and access of the flies. An experimental setup was designed to compare the time interval between exposure of carcass and the first deposition of egg batches by blow flies indoors and outdoors. The indoor carcasses were colonized on average up to 24 hours later than the outdoor carcass. In all nine experimental runs, indoors significantly less egg batches were counted compared to outdoors at all time points (2, 8, 24, 48 hours after exposure). Furthermore, less egg batches resulted in less feeding larvae which lead to no formation of larval masses. Inside such larval masses heat is produced which accelerates larval growth. For the post-mortem interval estimation of indoor corpses it has to be taken into account that the corpse was infested with a delay. Moreover, the growth of the larvae might have been slower as indicated by literature values for the corresponding mean air temperature as the missing larval mass formation decelerated the developmental rate.
As mentioned above, the method of choice for calculating a PMI is based on the assumption of a linear relation between temperature and developmental rate. For this thesis a new model was designed using the curvilinear development behavior of blow fly larvae. To build the model, published data for the development of Lucilia sericata were used. For each developmental stage an individual exponential function was fitted and for the PMI determination an ambient time-temperature profile is followed backwards using in each step the appropriate function. To validate the model, two blow fly species (Lucilia sericata and Calliphora vicina) originating from Bonn were bred to monitor their development under different constant and fluctuating temperatures. These data were implemented in the new model. To test the applicability of the new method, 3 piglets were exposed in the open with larvae of Calliphora vicina developing under different temperature regimes and collected at different stages of their development. Larval age was calculated using the new method as well as existing methods and the results were compared. The new model yielded the best results except for one trial when the temperature was constantly below 10 °C. As no developmental data was collected for such low temperatures, the model extrapolated the values for the calculation which lead to results not as accurate as for the other trials. However, the model appeared to be a reasonable alternative to the other methods and has one big advantage: it can include possible sources of error and calculates a standard deviation. No other method used for PMI estimation in forensic entomology was designed to produce a value judging the goodness of the results. The possible sources of error are the progress of the larval stage and the precision of the implemented temperature regime.
In this thesis, several real cases were evaluated and the PMI was calculated. It was shown that in some indoor scenarios, PMI estimation reveals better results when the calculation is based on developmental data of Phoridae (Diptera), when they are present on the corpse. They are much smaller and can gain access even to sealed environments. Furthermore, they are also active during winter time in contrast to most blow fly species. Moreover, two cases of corpses disposed in a compost bin were evaluated.
At last, most important in working with entomological evidence is the correct identification of the collected specimens. The standard method is identification based on morphological features of the animals. Nevertheless, it is possible to identify arthropods analyzing a small fragment of the mitochondrial DNA (mtDNA) COI gene. The method was validated for blow flies originating from other parts of the world but never for Germany. In this thesis it was shown that the primers published for the usage of this method are applicable for blow flies originating from Germany and that it is not possible by reference to the analyzed fragment to decide where the specimen originated from.