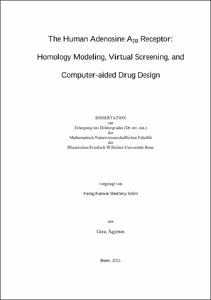 The adenosine A2B receptor belongs to the class A of G protein-coupled receptors. It is playing a crucial role in cell signalling and various physiological responses. The adenosine A2B receptor, a promising target in the challenge of improving human health, was and will be an important subject in the pharmacological research field. However, the X-ray structure of the adenosine A2B receptor has still not yet been resolved. Therefore, variants of a 3D homology model of the adenosine A2B receptor were generated using the crystal structures of the three related GPCRs (bovine rhodopsin, the β2-adrenergic receptor and the adenosine A2B receptor) as templates in order to proceed with looking into binding behaviour of antagonists and agonists by computational methods.
In detail, a comparison of the three models revealed a great deal of similarities among them and yielded concordant binding modes, which overlap significantly with the location of the binding site found in the adenosine A2B receptor. For further studies we chose the A2B-based model which is the one with the highest sequence identity (56%), the lowest rmsd value, and the most favourable gap ratio. The obtained results for the A2B receptor were in accordance with experimental data. This suggests that the 3D structure predicted by the homology method is sufficiently accurate for use in further studies.
The novel A2B structural model furthers our understanding of the adenosine A2B receptor by analyzing complexes with a series of adenosine A2B receptor antagonists and agonists using molecular modelling techniques. The homology model of the A2B receptor was used to explore the molecular basis for the affinity and selectivity of these ligands. The emerging predictions provided a basis for subsequent experimental molecular pharmacological studies. In particular, the results provide valuable information concerning the optimal structural requirements for selective antagonist and agonist recognition by the human adenosine A2B receptor. Most of the amino acid residues covering the putative binding sites are conserved among the four adenosine receptor subtypes. Asn254, His280, Trp247, Leu86, and Ile276, which are common to all subtypes, are believed to play an important role in the binding of both agonists and antagonists. In order to design new receptor subtype-selective ligands, we need to target the non-conserved amino acid residues that point to the center of the transmembrane part according to the present study, namely as Asn273, Leu81, Lys170, Val256, Ala271, Asn266, Lys269, Lys267 and Val250.
In this context, the protein modelling methodologies introduced and applied in this thesis provide a novel A2B structural model that is capable of assisting in the development of structural hypotheses on ligand-receptor complexes. As such it provides a structural framework not only for a more detailed insight into ligand-GPCR interaction, but also for guiding the design process towards next-generation compounds, which should display enhanced affinity. Also, this work shows the power of molecular modelling in modern macromolecular, as well as small molecule, research projects.
By using the new A2B structural model by the research described in this thesis, new insights were gained concerning conformational changes induced by agonists. An improved knowledge of the binding modes of A2B antagonists and agonists may facilitate the development of more potent and selective derivatives. The adenosine A2B receptor model was subjected to MD simulations both in complex with an antagonist and in complex with an agonist. A lipid bilayer and water molecules were added to realistically simulate the membrane environment of the receptor. The formation and deletion of intermolecular interactions were dependent on the presence of antagonist or agonist in the binding pocket which was proposed to represent perturbations that are necessary for the transition from an inactive towards an active receptor state. The results from simulations help on further refining the binding mode of the A2B complex models. In particular, the analysis of the putative receptor-ligand interactions has shown that part of the highly conserved (D/E)RY motif, changes in the NPxxY(x)5,6F motif, separation of the intracellular sides of TM3 and TM6 as well as conformational changes in the extracellular loops are suggested to form the activation mechanism for the A2B receptor. Our results also demonstrated a critical role for Glu14 and Asn25 in TM1, Asp53 in TM2, Arg103 in TM3, Glu229 and Trp247 in TM6, and His280, Asn282, Asn286 and Tyr290 in TM7 as anchor sites in agonist binding and receptor activation. Moreover, results from this study are not restricted to the adenosine receptors but may also apply to other members of G protein-coupled receptor family.
The goal of this work was aimed at finding novel potent antagonists for the adenosine A2B receptor using structure-based drug design which may be targeted in virtual screening experiments. In this study, we assessed the performance of the adenosine A2B receptor homology model in structure-based antagonist virtual screening by using combined ligandbased approach (FTrees), flexible docking, MD simulations and MM-GBSA approaches as well as database of commercially available chemical moieties. In addition, using binary ligand-receptor fingerprints, virtual screening could significantly be improved.
Thus chapter 4 of this thesis describes the procedure used for finding novel ligands with different scaffolds having better energy scores using the FlexX program and a database of commercially available chemical entities. In fact, promising as well as known reference compounds were identified. Therefore, these ligands may act as potent and selective antagonists for the adenosine A2B receptor, although their pharmacological properties need to be studied experimentally. Furthermore, the results show that the homology model, combined with accurate docking and virtual ligand screening methods provide a highly efficient tool for the identification of new GPCR antagonists as lead candidates for drug discovery. The overall study presented in this thesis is primarily aimed to deliver a feasibility study on generating model structures of GPCRs by a conceptual combination of tailor-made bioinformatics techniques with the toolbox of protein modelling.