Ecology and population status and the impact of trophy hunting of the leopard <em>Panthera pardus</em> (LINNAEUS, 1758) in the Luambe National Park and surrounding Game Management Areas in Zambia
Dokumentanzeige
JavaScript is disabled for your browser. Some features of this site may not work without it.

Ecology and population status and the impact of trophy hunting of the leopard Panthera pardus (LINNAEUS, 1758) in the Luambe National Park and surrounding Game Management Areas in Zambia 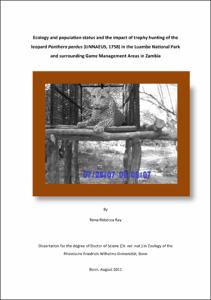 In this study that was carried out in Zambia, population size and density, diet, activity pattern and habitat use of leopards (Panthera pardus) were studied in Luambe National Park (LNP) and a bordering Game Management Area (GMA-A) where trophy hunting takes place. It was further aimed to find out if an impact of trophy hunting exists in this region.
By camera trap pictures individual leopards were identified. Capture and recapture models were used to analyze the leopard population abundance and the density in both the study sites. Two female and three male leopards were radio tracked to determine their activity pattern and habitat use. 416 fecal samples of leopards collected inside LNP were analyzed to investigate prey spectrum of leopards and biomass consumed by leopards.
Offtake quotas of leopards from 2004 to 2010 were analyzed in order to get an insight of the hunting pressure on leopards.
Population estimates resulted in 12 individuals for LNP 2008 and 10 for GMA-A. This result could be influenced by one or two factors.
Home range sizes resulted in 28-56 km2; (MCP-95%) / 33-81 km2 (Kernel) for males and 3-42 km2 (MCP-95%) /3-17 km2 (Kernel) in females. Analyses of activity pattern showed that all observed leopards moved significantly more during night than day times, males were moving much longer distances than females, movements of females during night times were less than movements of males. In terms of habitat use most of the observed leopards favored dense habitat types.
The prey spectrum included in total 18 different species. Ungulates made up the main part of the biomass consumed (LNP: 90.67%; GMA-A: 88.12%). Leopards showed differences in prey choice between LNP and GMA-A. This implies that the leopard is in competition with human hunters in the GMA because middle sized antelopes are trophy hunted in a higher quantity than small sized antelopes in the GMA. Analyzes of offtake quotas constituted that 43% of the country wide hunting quotas for leopards are covered by hunting blocks located in the Luangwa Valley, and 43% of the “Valley-wide” quotas is brought out from the four GMA’s surround the LNP. Further, GMA-A showed the highest hunting intensity among the four hunting areas around LNP. The findings of this study showed that an impact of hunting on the leopard exists and that it is exposed to a high hunting pressure in this region.
To take precedence against overexploitation effective conservation measures have to be adopted. In this context the quota of leopards needs to be reduced to 2 individuals per 1000 km2 to let the population recover.