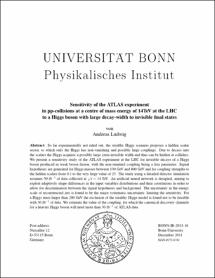 So far experimentally not ruled out, the stealthy Higgs scenario proposes a hidden scalar sector, to which only the Higgs has non-vanishing and possibly large couplings. Due to decays into the scalars the Higgs acquires a possibly large extra invisible width and thus can be hidden at colliders. We present a sensitivity study of the ATLAS experiment at the LHC for invisible decays of a Higgs boson produced in weak boson fusion, with the non-standard coupling being a free parameter. Signal hypotheses are generated for Higgs masses between 130 GeV and 800 GeV and for coupling strengths to the hidden scalars from 0.1 to the very large value of 25. The study using a detailed detector simulation assumes 30 fb -1 of data collected at vs = 14 TeV. An artificial neural network is designed, aiming to exploit adaptively shape differences in the input variables distributions and their correlations in order to allow for discrimination between the signal hypotheses and background. The uncertainty in the energy scale of reconstructed jets is found to be the major systematic uncertainty, limiting the sensitivity. For a Higgs mass larger than 200 GeV the exclusion of the stealthy Higgs model is found not to be feasible with 30 fb -1 of data. We estimate the value of the coupling, for which the canonical discovery channels for a heavier Higgs boson will need more than 30 fb -1 of ATLAS data.